Check it out... if you seek an 80's electronic throwback score, It Follows achieving marginal success in this region alone

Skip it... if you are easily irritated by pounding, aimless, repetitive and unoriginal forays into a classic horror sound, unfortunately tainted in this context by the composer's lack of restraint in terms of both general composition and mixing 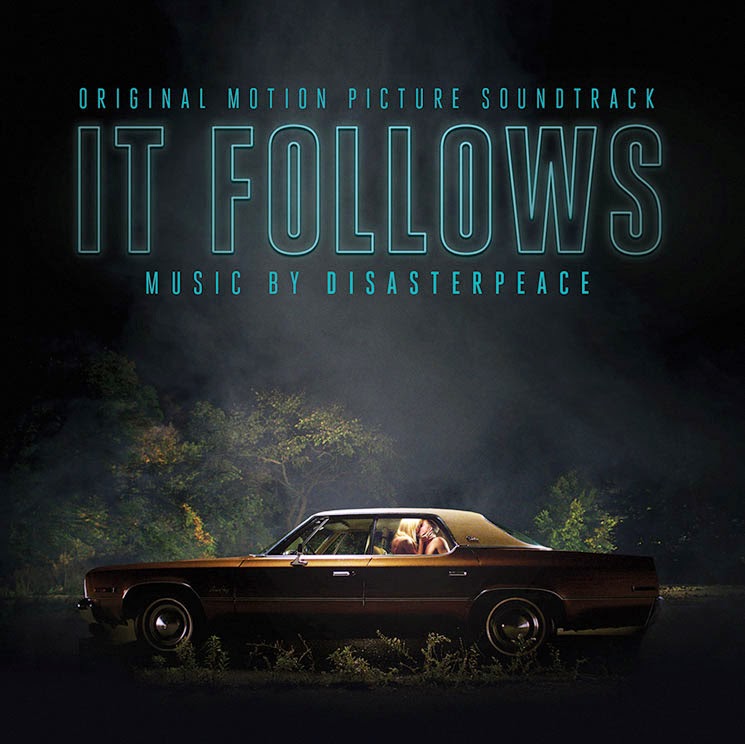 "Disasterpeace leaves restraint at the door and adheres to exactly what one expects from an electronically-based horror album."

The dreary darkness that permeates the entirety of recent indie horror hit It Follows lends itself to comparisons towards last year's thematically-poignant The Babadook. Both films contain a grounding in moral and meaning that separate them from the usual modern horror fare, as well as possessing strong performances, a focused direction, impressive cinematography and detailed sound design: not to mention the creatures contained within possess all that is required to scare the pants off any sane, relatively sensitive person. The director and screenwriter David Robert Mitchell has imbued his latest feature with a professionalism that one expects from those who have a much greater budget, and has quickly garnered an exceptional response from both the critical circles and the mainstream. The main attraction behind the endeavour is not necessarily the creativity involved in regards to the film's central concept, nor the nostalgic cinematography and pace, but the genuine terror instilled within the picture's concise 107 minute long length. The throwback, vintage mood that pervade's the picture is something that many can appreciate, much as was the case with last year's John Wick and The Guest, both films which proved to be critical hits. Also receiving particular acclaim is the score, provided by composer Disasterpeace, whose previous works have included such hits as the video game FEZ and the short film Somewhere. His retro-synthetic approach to scoring the film has raised numerous eyes within Hollywood, and the general mainstream has begun to embrace his partially eclectic musical voice.

I gather that to gain an appreciation of any of the music within this monstrosity of an album, one needs to possess a fondness for the visual format and Disasterpeace's efforts within the intended context. Without, this is dull and derivative drivel: the equivalent of a more forceful Gone Girl, with a greater quantity of the minuscule instances of brief relaxation that Reznor and Ross so fortunately allowed for. Seeing as Australia's release dates for It Follows are varied and sparse (my town not receiving a release date whatsoever), I can only speak from my own brief experience with the solo album: a forty-four minute long slog. Every year, there are but a few scores which receive major attention from the masses. Last year, we had Under the Skin, Gone Girl and Interstellar, three scores which lack the technical bravado, emotional resonance nor the variation of some of the year's finest efforts, including How To Train Your Dragon 2, Godzilla and Grand Piano. That said, Interstellar still stands out as the most accomplished of the three mentioned, Zimmer's methodology an aesthetically pleasing new development into his prolific career. The other two featured some of the most terrifying music I've ever been exposed to. Whilst Under the Skin could be partially commended for the nature of the composition, the experimental style a welcome deviation from any norms of the scoring medium, it still was bereft of any defining development, a strange concept considering the protagonist of the visual counterpart's arc was heavily concentrated around a building of human characteristics. Gone Girl remains one of the least impressive of the year, lacking basic thematic, melodic or methodological growth throughout its grueling length, and pulsing away without a hint of compositional prowess. As to why Fincher can not recruit Howard Shore again for another foray, especially after their extremely impressive Seven back in 1995, one may never know, especially considering that composer's intellectual superiority in regards to his musical output in comparison to Fincher's current collaborators.

These sudden instances of mainstream interest in our small but devout community are not limited to last year, as many of you would know: every year, we are exposed to compositional idiocy, acclaimed by the masses for an unknown reason. Some of these score's are worthy of more attention and praise than others, but the vast majority are usually resented by us. Look towards last year's abysmal Mr. Turner by Gary Yershon, a score which did nothing both inside and outside of its context and was loathed by scoring critics alike, yet still garnered the attention of the oft-times witless Academy of Motion Picture Arts and Sciences. Enter It Follows into the equation. The pulsating and lifeless synthetic-reliance lacks the nuance of a comparable Power Glove album (who provided a similar but surpassing effort with Far Cry 3: Blood Dragon a few years ago), and the sound design is so immensely overbearing that it's hard to just sit back and listen without turning the damn volume down. I can understand the desire for a 80's soundscape given the film's nature, but is it impossible to induce a semblance of subtlety at the same time? This grating and pompous album is a reminder of what is more obviously wrong with experimentation within film, video game and television scoring: a lack of emotional connectivity or enunciation of development. A film is a constantly moving piece of entertainment, every word and movement telling a story or furthering a character's personality in the eyes of a viewer. A conversation can advance the thinking of a protagonist or antagonist, or can drastically change the story at any given point. The innate human subtlety and our ability to hide our true emotions dictates that any discussion in any film is full of variations and peculiar attributes. So the concept that a score can just vibrate over and over again aimlessly confuses me.

Unlike Gone Girl or Under the Skin, I can understand an average listener's fascination with such eccentric forms of synthetic composition, the sounds that Disasterpeace explores all relatively distinct in execution. His real strength obviously lies in sound design, and at least he has produced an album which has dynamics to it in terms of the technicalities, even at its most emotionally-devoid segments. Sirens blaring, electronic bass pulsing, distortion infused within every opportunity possible: it's at least engaging on a fundamentally inquisitive level. The second cue, 'Title', even features an applaudable and exceptional lead melody, serving as a brief refuge from the groaning synthetic onslaught the rest of the score encompasses. The album fluctuates from perpetually irritating loudness to a cliched assortment of over-pronounced ideas. What I assume is the protagonist's major thematic concept, an at-least partially diverse leitmotif, is explored within the disappointingly unengaging and distant 'Jay', a piece so rife with intrusive reverberation that it's sickening. The most repulsive of concoctions come within what are intended to be horror cues, the vast majority coming off as dreadfully oppressive and imperious pulsations, Disasterpeace leaving restraint at the door and adhering to exactly what one expects from an electronically-based horror album. The shuddering force and lack of understatement witnessed within 'Company' shall leave many with both a deafening headache and an anger that shall not soon be sated. It is followed by the decent 'Detroit', but nothing can erase the monumental pain experienced within this disaster.

What is at least appreciable in small durations is the grunt that Disasterpeace is capable of producing; when he's focusing on the bass of the mix, accentuating the underlying rhythmic forces driving the entire album, it could almost be considered enjoyable. The opening of 'Lakeward' features an example, and it is glorious, right up until the higher register's begin to receive their treatment and the piece dissolves into a repetitive and dull melody. 'Relay' also happens to highlight the bass region, and it serves as one of the score's best fragments. That said, the composer's fascination with post-production effects is the nail in the coffin for the entire album, as he comes across as a Vangelis-post Blade Runner wannabe. The artificial percussion and sweeping electronics presented within 'Inquiry' instantaneously provoke this comparison, and it's startling how incompetent the score then subsequently sounds. Vangelis is a virtuoso of the electronica genre, his work within film providing some of the most accessible yet defining synth scores ever created. As a contrast, Disasterpeace infuses his work with overstatement, every idea so blatant, loud and forceful that it becomes impossible to just sit back and enjoy the ride.

The argument can be made that this is an intentional characteristic of the effort; this is a horror score after all. But horror is so often protruding anyway. The electronic concept has never been anything original for the genre, nor has utilization of nostalgic instrumentation and composition ever been perceived as anything overtly unique. The aforementioned John Wick and The Guest both were approached by their respective composers with this soundscape in mind, and both achieved far more than It Follows. Long, arduous sessions of silence (witnessed within Gone Girl last year) don't do anything to distinguish a score from the crowd of crude synthetic-based efforts consistently pumped out by indie composers. Disasterpeace is at least intrepid in where he takes this work, the range of different styles utilized within a relatively confined setting at the very least applaudable. The central theme still stands out as a particularly good highlight, and there were four cues which I at least enjoyed. But the entire album is both reminiscent of other scores (and not in a nostalgic fashion, but an unoriginal way) and yet insanely irritable on its own terms. I would be able to understand the hysteria from the mainstream population if they were acclaiming the score's effects solely in context, but the amount of people glorifying the trite efforts on album are too great for me to continue to dismiss the fascination as anything less than bogus. There are plenty of superior horror, synthetic and 80's throwback scores to choose from: don't look towards this one. You can purchase It Follows on Amazon and iTunes, here and here.