Check it out... if you're a fan of the original, and appreciate wild, boisterous and thematically adept fantasy compositions, Legends of Chima: Volume 2 as accessible and entertaining as the preliminary release

Skip it... if you sternly disapprove of large magnitude, bold and unabashed writing fantasy writing, despite the inherent positives layered within this glorious score 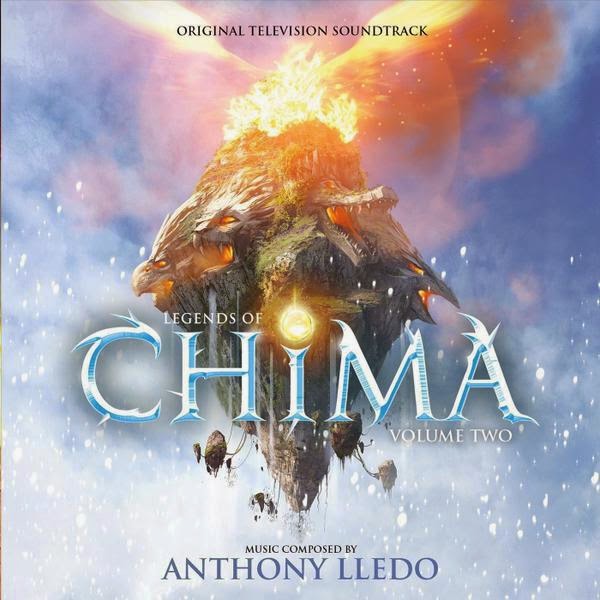 "Legends of Chima: Volume 2 is as bold and beautiful as its predecessor, and I could not be more delighted."

Relatively well-received Cartoon Network series Legends of Chima ended its nearly two year-long stint late last year, the ratings having dipped over the course of its run. Having seen only portions of the first episode, I found little enjoyment in what held potential for a vast canvas of colours, concepts and relationships. The story follows Laval the Lion, an adolescent member of the Lion tribe who must battle a former friend of his, Cragger the Crocodile, over the future of Chima, the land they preside within, and the precious resource known as Chi. In terms of animation the series is nothing outstanding, numerous other modern Cartoon Network series' boasting far better graphics. An intriguing premise does not, unfortunately, lend itself to the success of the execution, Legends of Chima childlike in every meaning of the word. Yet, for those score-lovers who traversed the album prior to checking out the visual format, they may have been fooled into believing this was a far-reaching, highly dramatic and entertaining escapade, full of rampant battle sequences and detailed relationships. Composer Anthony Lledo provided all the music for the series, and his intricate bombast compositions, full of glory and wistful adventure, are immediately intoxicating and greatly increase the value of the animation. Despite the questionable mixing of the score within the visual context, his work astounds from beginning to end, and is immediately reminiscent of certain James Horner, Basil Poledouris and James Newton Howard outputs. The first album, released in 2013, was a joy to listen to, Lledo pouring his heart and soul into what could have been an otherwise unremarkable task.

Lledo has returned this year to gift us with an early Christmas present in the form of a second volume, and its mighty size is welcomed with open arms. It's hard not to get lost in the concise but nevertheless comprehensive world that Lledo has managed to establish, and for fans of the original release, the same flavours are present here to entice you back for another dip. The wonderful blend of straight-forward thematic writing and more sinister ambiant composition lends itself to some of the years finest moments, and there are few detractors that present themselves all throughout the listen. Familiarity seeps in as the first notes of 'Return of the Heroes' announce the arrival of the primary theme, similar to the initial statement of the same brass theme within 'Laval the Lion' from the preliminary release. Despite this significant familiarity, Volume Two remains strong enough on its own terms to merit individual analysis and commendation. New instrumentation, a stronger emphasis on darker material and less immediately recognisable thematic statements announce a new chapter in this musical canon, and it's futile to resist its charms. Legends of Chima: Volume 2 is as bold and beautiful as its predecessor, and I could not be more delighted.

Tonally, Volume 2 undertakes a more villain-orientated sound, Cragger's accented flute, underlying cello and now organ (witnessed within 'Lavertus') influencing greater portions of the score than ever before. One will find his intimidating material layered within 'Into The Outlands', 'The Dark Tribes', 'Ancient Hunters', 'The Dark Tribes' and 'The Tale of Tormak'. This menacing presence is slowly withdrawn as the score plods along, the more wholesome brass, woodwind and choral tendencies battling Cragger's thundering manifestations. The final battle within 'Victory' sees the off-key Cragger authority fully defeated, as a final statement of a protagonist theme beckons triumph for good. Evil wages war with virtuosity more consistently throughout than Volume 1; 2:50 minutes into 'The Dark Tribes', the all-encompassing brass threatens to consume the dwindling flutes, staccato woodwind rhythms trying to escape their inevitable demise. 'Frozen Land' is the strongest action piece available, the intelligent combination of Lion and Laval thematic material battling with the darker snare rhythmic devices of evil making for a consistently enjoyable piece. Swashbuckling brass enters the fray at 0:50 within this aforementioned piece for one of the score's most irresistible leitmotific incorporations; it's glorious stuff. The piece evokes recollections of Zimmer's The Last Samurai and Gladiator, Horner's Avatar and (strangely) Price's Gravity, all applaudable comparisons.

Disappointingly, the Chi theme from the original work is largely absent from Volume 2, though the mysterious tone that it invokes is reflected in numerous other pieces all throughout. For the most part, the vast majority of the major ideas presented within the initial installment into the series resurface in this continuation, from many of Laval's minor motifs to various playful themes, the latter explored primarily within 'Return of the Heroes', 'Hills of Chima' and 'Lavertus', to glorious results. Lledo takes sufficient time away from his more dramatic elements to engage the inner-sentimentality and childlike exuberance of the story. I'm reminded of the friendship theme within How To Train Your Dragon as the marimba, shaker and strings arrive at 1:33 during 'Hills of Chima' for a thematic statement as elegant and gratifying as any I've heard recently.

Lledo has built upon his embryonic effort to deliver what is essentially a sequel score; one that outmatches the original in nearly all conceivable manners. It's bolder, more fluent and features tighter orchestrations, but the real kicker is that it never loses the impactful heart at the core of the story that the original featured so prominently. Cartoon Network rarely offers composers opportunities to explore such lavish routes of harmonious and melodic propensities, so when such a score arises, one as embellished and versatile as Legends of Chima: Volume 2, it should be embraced wholly. I was angered at the lack of attention the original release received upon launch, and seek to highlight the values of this glorious series; I deeply suggest you purchase both the initial score and Volume 2, as you shan't be disappointed by the quality of recording, nor Lledo's ambitious writing tendencies. Both scores suffer from a marginal dip in quality due to a number of shoddy leitmotif transitions, but this is an almost insignificant fault in the scope of things. Your money could not be better spent on something as rollicking and entertaining as this! You can purchase the digital download of Legends of Chima: Volume 2 on Amazon or iTunes, here and here. You can purchase the CD on Screen Archives Entertainment here.

Additional notes about release: at the time of posting, Amazon does not offer physical copies of the score. CDs available while quantities and interest remain.