____
Check it out... if you seek a modern action score that possesses intelligence, a wide variety of central themes and an alternative sonic palette that differs from genre conventions

Skip it... if the inclusion of a classical piece, 'Nessun Dorma' , as a motif for the female lead would tarnish the score and distract too greatly for redemption
____ 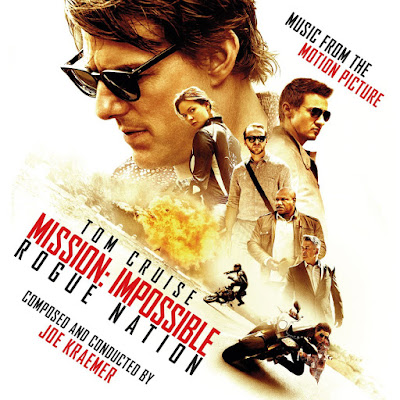 The tumultuous and oft-times unreliable nature of the Mission: Impossible franchise has not dissuaded fans and general movie-goers alike from eagerly anticipating each new installment into its canon, both films and scores. Danny Elfman's musical accompaniment for the initial foray, directed by Brian De Palma, yielded mixed reactions, and this didn't improve substantially with Hans Zimmer's Mission: Impossible 2 and Michael Giacchino's Mission: Impossible 3 and Mission: Impossible: Ghost Protocol (though the latter most score was praised for Giacchino's compositions, the mixing has since been deemed an absolute disaster). But this year, Christopher McQuarrie's Mission: Impossible - Rogue Nation had a score, composed by Joe Kraemer (who had previously worked alongside McQuarrie for Jack Reacher in 2012), that received near unanimous appraisal, film music critics already citing it as one of the finest action scores of the year to date. And rightfully so; Kraemer's Rogue Nation is a thoroughly thrilling, adventurous and diverse score, that encapsulates all the stylistic flair that has been sorely lacking within the prior scores in the series. Riveting brass and string ostinatos; fast-paced action; throwbacks to the original Mission: Impossible television series; lavish yet focused soundscapes; Rogue Nation is exempt of filler, every moment worthy of examination, critical analysis and applause. For fans new to the franchise, who are perhaps only familiar with the famous central leitmotif, Kraemer interpolates the main melody a great deal, and maintains a sense of forward motion all throughout. For those who have studied the previous Mission: Impossible scores and listened to Jack Reacher, prepare to pay witness to what is the finest score in this series' history, the strongest score Kraemer has yet composed, and arguably one of the most impressive works of the year thus far.

It begins with rousing crescendos, a sense of gradual building imbued within the opening track, 'The A400', a tremendously versatile, heart-pulsating piece that culminates in statements of the main theme that we know so well. Kraemer goes on to establish tension and intrigue ('Good Evening, Mr. Hunt' and the opening of 'Escape to Danger'), before exploring sounds that prove rare within Western scoring; 'Havana to Vienna' introduces guitars of a different sonic nature to classic orchestral instrumentation, and the European quality that adorns the latter half of the sensational 'The Syndicate' is a remarkably entertaining, sweeping diversion from the status quo. The theme for the villainous and antagonistic Syndicate group is given a gorgeous presentation during the second track, 'Solomon Lane'; clarinets and violins join together to offer a startlingly effective performance of this theme, its progression and underlying brass influence similar in vein to that of James Newton Howard's spiteful Maleficent identity from last year. The female lead, Ilsa Faust, is gifted a motif derived from a classical piece, 'Nessun Dorma', explored most blatantly within 'A Matter of Going'; a number of individuals have expressed irritation with the connection between the character and the classical piece, and how having 'Nessun Dorma' represent Faust is a questionable and unnecessary decision, but for those who have little-to-no prior knowledge of the cue in question, it shan't detract from your listening experience in the slightest. Kraemer's material is very rarely anything less than wholly engaging, both action, quiet instances and suspense as captivating as one-another, making for an exceptionally quick sixty-eight minute listen. Rogue Nation is devoid of a wide variety of scoring cliches, and exceeds expectations wholeheartedly. For those who desire a genuinely exhilarating, inventive modern action score, you needn't look any further; Joe Kraemer's Mission: Impossible - Rogue Nation is the perfect combination of homage and innovation, and remains one of the most entertaining albums of 2015 so far. You can purchase Mission: Impossible - Rogue Nation on Amazon or iTunes, here and here.

Additional notes about release: the CD release features two additional tracks unavailable on the digital platforms ('It's Impossible' and 'This Is the End, Mr. Hunt').