____
Check it out... if you appreciated the atonal, oft-times animalistic sounds that made up a great quantity of the running time on Johann Johannsson's score to Prisoners, but seek a score that also possesses a sliver of melodic and thematic presence, Sicario one of the composer's most well-rounded ambiant works thus far

Skip it... if a harsh and brooding soundscape that cares little for whimsical flourishes or bombastic grandeur sounds like something you'd rather not invest your time in
____ 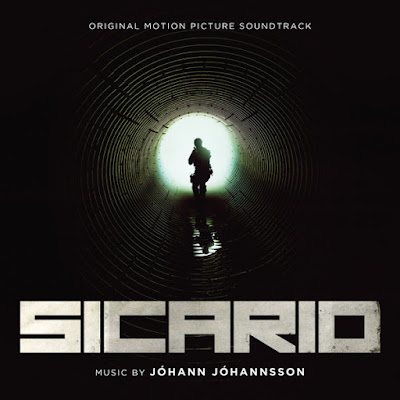 For his second collaboration alongside celebrated director Denis Villeneuve, Johann Johannsson has abandoned the lighter inclinations of his previous work to match the dreary, dismal quality of the visual content. Following on from the dissonant, synthetic layers that defined his previous Villeneuve project, Prisoners, Sicario is a riveting, perilous and foreboding score, that reveals its true intentions, sentiments and twists over the course of a captivating fifty-four minutes. Whereas Prisoners felt entirely devoid of emotion, Johannsson's compositions in that instance reminiscent of Trent Reznor and Atticus Ross' work on the hopelessly incompetent The Girl With The Dragon Tattoo, Sicario manages to successfully incorporate heart into an admittedly aggressive soundscape, whilst retaining the inherent hostility. Building off of a number of fairly straightforward yet effective leitmotific concepts, Johannsson constructs a score that looms over the listener with deadly intent, pulsating synthetics interacting with forceful string passages that crescendo at a measured pace to create a menacing mood. From the meticulous, deliberate timpani beats that characterise the opening track, 'Armoured Vehicles', to the slithery and demonic two chord string and brass melody most prominent within 'The Beast', to the frenetic chaos of the exceptional 'Convoy', Sicario rarely relents when it comes to its roaring ambiant tones. For those who found little to appreciate during this year's Ex Machina, beware; Johannsson treads much the same route, though his methodology is undeniably more stylish, compelling and engaging than that of Salisbury and Barrow's.

Sicario is not entirely bereft of melodic influence, the composer's evocative and rousing work on last year's Oscar-nominated The Theory of Everything influencing the lighter moments on this score. In this regard, the obvious standout is 'Desert Music', a poignant and devastatingly reflective track which should kindle remorse in the hearts of even the most cynical of listeners. The heavy reverb infused within 'Melancholia' adds size and scope to the comparatively intimate flamenco guitar that permeates the cue's length, and thus successfully expands the emotional capacity of the piece. Still, the vast majority of the release maintains the hard-hitting, discordant instrumentation and writing that we received with Prisoners, executed here with more finesse and brute force than on anything else in Johannsson's discography. If you expected anything other than the animalistic sounds Sicario contains, you have disillusioned yourself; Villeneuve is a methodical, dark and relentless director, whose vision has always rendered scores of an equally pessimistic and dismal nature. For the genre of ambiant composition, Johannsson has managed to compose a piece of great value, rich with depth and dynamism. It's not a particularly accessible score, and there are certainly instances where Sicario is more monotonous than affecting (the finale, 'Alejandro's Song', is a tedious, nearly six minute long slug of a listen, and 'Fausto' is not much better), but for what Johannsson sought to achieve, he excels with flying colours. Sicario doesn't give a fuck what you have to say; it's loud, angry, vehement and belligerent, and it does not care for adherence to the conventions of standard film scoring. You can purchase Sicario on Amazon and iTunes, here and here.

Additional notes on release: a digital booklet is available on the iTunes release.