THE MAN FROM U.N.C.L.E Score Review

Check it out... if you're a fan of nuanced, varied jazz scoring, Daniel Pemberton's The Man From U.N.C.L.E a perfect example of how to execute old-school, smooth composition

Skip it... if the sharp, higher register accents of Italian-influenced instrumentation turn you off, as Daniel Pemberton employs them in great quantity here 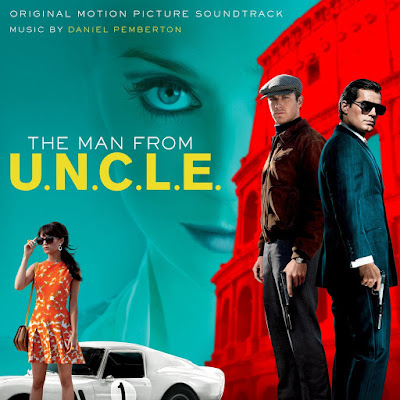 With The Man From U.N.C.L.E, Daniel Pemberton validates his position as one of the most promising up-and-coming composers working in the field of film music at present. U.N.C.L.E is an entertaining, sexy and technically dazzling entry into the world of spy scoring, a wide variety of instruments, tempos and chord progressions employed to considerable effect during its extensive duration. With this score, Pemberton combines contemporary compositional influences with the old-school smooth jazz that define Jerry Goldsmith and John Barry's most stylish works (The Russia House, for example). The methodology he establishes here is meticulously conceived, certain tracks overflowing with forceful percussive patterns and unrelenting basslines. For your average jazz aficionado, Pemberton's eclectic combination of abrasive rhythmic elements (exemplified in tracks 'Escape From East Berlin', 'Bugs, Beats and Bowties', 'Breaking In (Searching The Factory)' and 'The Drums Of War') and wickedly addictive melodic passages (the ridiculously sexy guitar and bass riffs found on 'His Name Is Napoleon', and the string work that individuates 'Signori Toileto Italiano') will prove equally fruitful. The action is appropriately captivating, tension is captured with long, winding harpsichord, keyboard and string melodies, and the mood is so individual yet familiar that The Man From U.N.C.L.E seems to instantaneously evoke pleasure and happiness; the goal of any score or musical piece residing within this genre.

Yet, there is something that proves alienating about Pemberton's efforts here; perhaps it's the frenetic nature that director Guy Ritchie demanded of the score, so as to better serve the visual format. His style, as evidenced by Snatch, is built around visual aesthetic, and how it is fundamental to serving and explaining his character's motivations and actions. His camerawork and editing is tight, lavish and constantly moving, and thus, musical accompaniment for his films has to ride a fine-line; it has to have a free-flowing, distinct feel to it, but it must also be tailored to a scene in a particular manner. All composers write music to film, adhering to specific beats in the action, drama and narrative, but Pemberton's efforts in this context feel, inherently, more pinpoint. I haven't viewed the film, so my assessment could be drastically inaccurate, but what the score tells me is that Ritchie's film is full of forward-motion. Pemberton's writing is intentionally spasmodic in a number of instances to more exactly reflect the onscreen action, and it has the capacity to leave the listener trying to catch up for certain durations.

All the same, to dismiss the variety of achievements Pemberton has realised with The Man From U.N.C.L.E is a disservice; despite some oddly paced segments and some questionable recordings ('We Have Location' and 'A Last Drink'), much is rectified by the sheer attention to detail. The instrumentation, whilst sometimes grating in register, is mostly intricate and varied, and the album sports a great deal of charming and undeniably sophisticated highlights. It's a fun, slick ride that deserves a number of listens, to fully take in the elaborate and comprehensive compositions. You can purchase the standard edition of The Man From U.N.C.L.E on Amazon and iTunes, here and here, and the deluxe version here and here.

Additional notes about release: both deluxe and standard version of the album are available, with the deluxe version sporting four additional score tracks. Both editions come with a range of jazz tracks that are not a part of Pemberton's score. iTunes offers digital booklets on both copies.