Captain America: The Winter Soldier
Check it out... if the music to films and games like Black Hawk Down and Battlefield 3 had you on cloud 9, in all their synth glory

Skip it... if you didn't like Jackman's Captain Phillips from last year, or don't enjoy unoriginal, boring, irritating synthetic crap in general 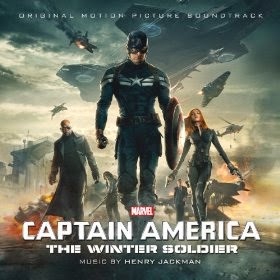 It is my belief that this generation of film shall be defined by the age of the superhero films, which I'm certainly not unhappy about. Thanks to films like The Dark Knight, and Spider-Man, the superhero film genre has expanded from corny fun at the theatres, to serious, smart and inventive storytelling, which is a pleasant change. Whilst many herald 1978's Superman as a masterpiece, I much prefer the serious tone that was presented in The Dark Knight or even Man of Steel to that of Donner's tale. Perhaps it's the generation I've been raised in, perhaps it's that I crave a depressing, difficult story, but either way, my opinion stands as just that. And in this generation of superhero films, we have two front runners, vying for the greatest of profits and success; DC and Marvel. Whilst I prefer DC over Marvel any day, I can't criticize Marvel for the direction it's taken it's cinematic universe, and the great amount of profits it's yielded them; it's a commercially profitable direction, that often leads into good critical reception as well. The dark tone that DC has inhabited was shifted away from with Marvel, and they reinvented the fun superhero film, primarily with films like Thor, Iron Man, and most notably The Avengers, a film which has been praised somewhat excessively in my mind. Now comes Captain America: The Winter Soldier, the sequel to the 2011 film which I haven't seen, and it's been receiving quite a bit of praise. The score to the previous film in the franchise, Alan Silvestri's reinvention, was received generally positively, yet he has left the Captain America title, and so therefore, there is a space needing filling. Henry Jackman, co-composer of last year's Captain Phillips, has stepped in to take over the composition to the sequel, and looks to creating a more serious, modern score, with heavier emphasis on a sabotage-ish tone, something that, based on the trailers, will work well within the film. But does Jackman's Winter Soldier fall short of expectations after the previous score in the franchise, or does he move past the shadow of Silvestri and Brian Tyler, both capable Marvel composers?

The answer to that is the latter suggestion; this score is utterly atrocious. Whilst it has a few major highlights, and a cue which I will admit as one of the best of the year as of this far, it falls utterly short of an acceptable sequel to Silvestri's fantastic score. Layered with irritating synth, and next to no themes worthy of mentioning, The Winter Soldier is such a horror to suffer through, that I beg you to not even look into this score. It will only bring you pain and suffering people! Jackman's attempt at a modernized Captain America score involves infusing large quantities of electronic music into the score, all, or close to all, that feels incredibly shallow; this does not make for a good sequel to such an established and well paced score as The First Avenger was. Jackman continues to butcher the previous material by finding himself a new theme for Captain America, which is completely unnecessary! Captain's theme has been introduced, and well received, and even made a short mention on the Thor: The Dark World score, by Brian Tyler, so it's confusing as to why Jackman dropped it. This is not a reboot Jackman, this is a damned sequel! Provide some consistency between scores!

Jackman, for me, has never allowed himself to develop his own individual identity within his own music; at his most abysmal and simplistic, he sounds almost like a Zimmer try-hard, although that may be because of Zimmer's affiliations with Jackman in the past. This belief though, that he's attempting to recreate Zimmer's style, is further proven within The Winter Soldier. His attempts at creating electronic gold are far fetched, and when he takes to using artificial instruments and sound, not only is it badly composed and produced, but it's also without base, theme and reason! I agree that the tone the film is going for certainly wouldn't reflect the kind of score Silvestri explored within The First Avenger, but honestly, more orchestral music could've and should've been provided for the sequel. Jackman is not Junkie XL or Zimmer; he can't create deep, meaningful music using artificial sounds! He tried in Captain Phillips, and the results were fairly mixed, and that was with the help of Zimmer himself! Here, though, as highlighted in pieces such as The Winter Soldier, Jackman provides some deeply irritating music, if you can call it that. He doesn't attempt to embellish the synth in any way, shape or form; he allows it to run it's passage in ruthless, uninspired ways.

I'm going to explore the piece The Winter Soldier further here, as I find it necessary to talk about this filth and what makes it so incredibly horrific. Not only is the lack of distinct theme annoying, but the seemingly endless, dreadful use of synth nearly drove me to vomiting the first time I heard the piece. The use of all the individual sound effects was sickly, idiotic and nothing came together to form a coherent... well, anything! This is where my thoughts trudged back to my friend Battlefield 3, one of the worst scores I've ever heard. That score is 36 minutes long, yet I found more worse in this 6 and a half than I did in that entire score. That's right, you read correctly; I found more wrong with this single piece than I did with my least favorite score of all time. Not a good sign of things to come. Piece 11, Hydra, reflected much the same as The Winter Soldier did; again, a mindless and moronic use of synth, coupled with sound effects that formed nothing but rage from myself. I'm seriously struggling to find more words to criticize this crap; originality is important in writing. Funnily enough, Jackman doesn't conform to this rule, and instead takes inspiration from the worst parts of electronic based scores, and doesn't seem intent on creating new, inspired music; I heard a lot of Black Hawk Down in this score people, and that is certainly not a compliment!

Despite my intense gripes for this score, there are a few moments where Jackman truly shines. Project Insight introduces us to the new theme, and despite my issues with it that were explored earlier, it's actually a fairly decent theme. A slow crescendo of a theme, complimented with some impressive, brawny brass, makes for a respectable and understandable theme that understands what Captain America is all about. Talking about the use of orchestral instrumentation, it's when Jackman gives over to the orchestral element of this score that this score turns out to be not that bad; in fact, I had to give a highlight place to Taking A Stand, as well as the piece Captain America, a highly effecting piece, for this exact reason. The use of orchestral music was well coupled with some well placed synth. I feel like composers are forgetting what electronic music should do; it's not meant to be the focal point of a score, or even an individual piece. It should add another layer to the cue, and serve as something, say, edgier than what orchestral may or may not be able to accomplish. When Jackman implements this, he creates some music which feels in touch with Captain America as a character and a musical concept. He's meant to be a heroic being, and that tone is generally unachievable with the electronic music that Jackman puts to use. When Jackman looks to creating pieces with some real heart and orchestral grandeur, he succeeds; it's when he dismisses this concept, and attempts to go back to that cumbersome, poorly utilized electronic music that this score falls apart.

Despite the glorious highlights of this score, Captain America: The Winter Soldier indulges in some dreadful, unforgiving music, that doesn't deserve any of your time, and more importantly, your money. If you're interested in this score and what it can provide at it's best, look into my highlights; apart from that, stay away from everything else! You can purchase Captain America: The Winter Soldier on Amazon here.