Game of Thrones: Season 4, Episode 2 "The Lion and the Rose" Review

Season 4,  Episode 2  “ The Lion and the Rose ”
Positives this week included... Joffrey's death, the Dreadfort's reveal, Tyrion and Jaime's scene, Bronn and Jaime's sparring, Dragonstone's first scenes of the year, Bran's vision, the Purple Wedding as a whole

Negatives this week included... Absolutely nothing! 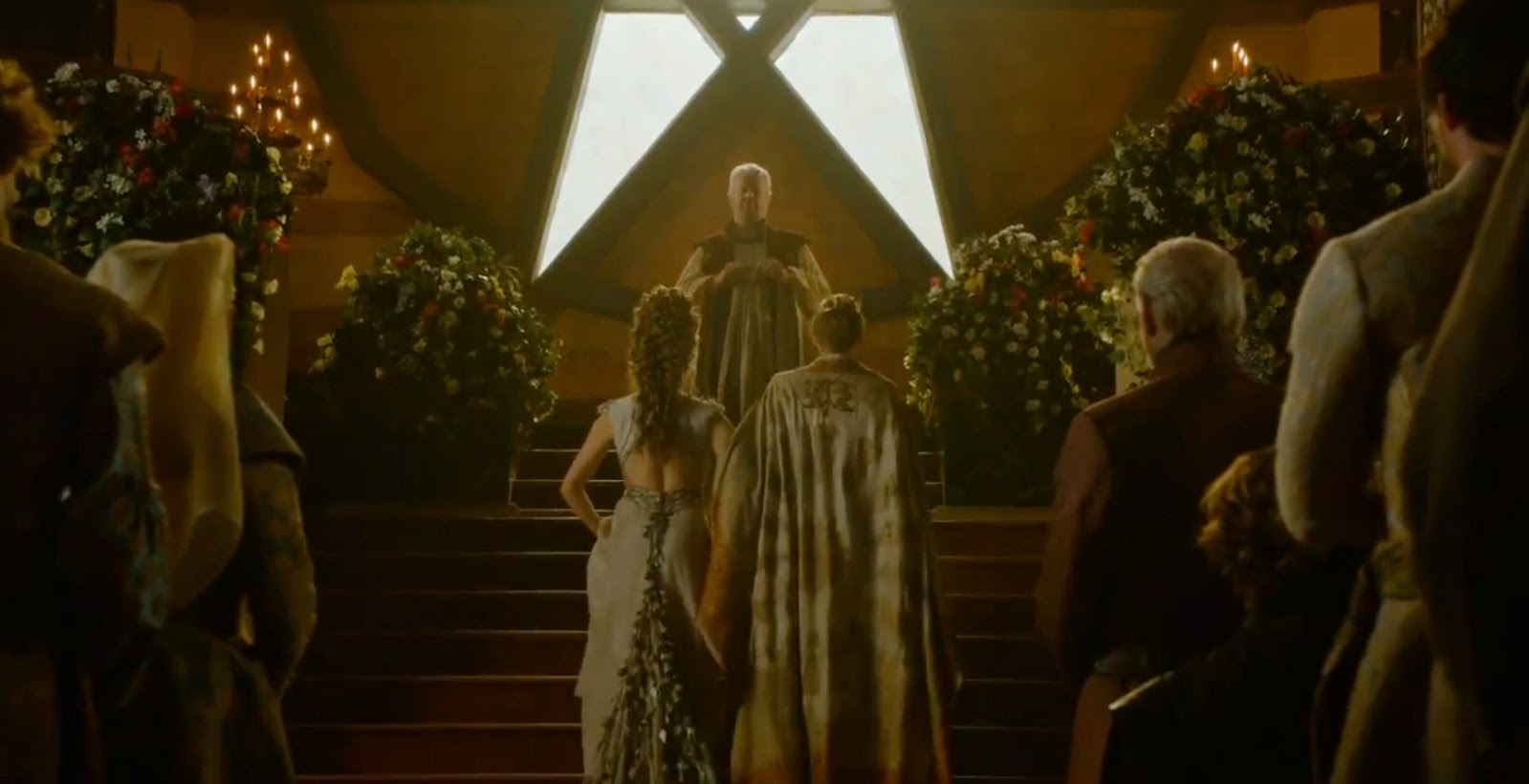 One word; finally. The death of one of the most despised characters in television history has occurred, all at the hand of George RR Martin, who wrote this week's episode of Game of Thrones, titled The Lion and the Rose. This is possibly the most satisfying hour of television that you'll see all year, and I'm not even talking about the wedding right now! Let's jump in to one of the best episodes of Thrones of all time!


We begin this episode with Ramsay Snow, a woman whom we suspect Ramsay is banging, and Theon... I mean Reek! They're hunting down a woman because... we don't really know why. Maybe it's just because Ramsay is a sick twisted little shit, who likes to hunt down innocent women? Yeah, probably that. Great introduction to the Bolton's, Reek and especially the Dreadfort. Loved the look of the whole castle, and the distance shots of it were magnificent. Theon is well and truly broken, and it's good to see. Well, not really! I'm just saying, I'd rather we not have to see another season of torture porn; we get it, Theon is dickless and it's not looking so bright for him! Just get to the portion where he's well and truly broken, and adheres to whatever Reek wants of him. Fortunately, that's what they've done, and it's kind of heartbreaking to watch. Sure, Theon has made his mistakes, but no one deserves this fate. Roose Bolton returns to the Dreadfort, with a fat woman named Walda, who is his wife. If you hadn't guessed already, this is a daughter of Walder Frey. Walder wished for Roose to marry in to the Frey family, and allowed him to choose his wife out of all of his daughters, telling him he could have that daughter's weight in gold. So what does Roose do? Pick the fattest one of course! Roose is angry at Ramsay for maiming Theon, as Theon is meant to be a bargaining tool; Balon Greyjoy is still alive in the show, and has had his men take Moat Cailin during season 2 I'd guess. By the way, sorry for that partial spoiler; Balon dies near the start of Storm of Swords, so he should be dead by now. Nonetheless, the Ironborn hold Moat Cailin, which is the key to the Neck, and Roose wanted Theon as a bargaining tool. His maiming may have reduced his value in the eyes of Balon, so Roose is angry at Ramsay. Roose also doesn't completely trust that Theon is broken, so Ramsay has Theon shave him; he basically gives Theon the opportunity to kill him, yet Theon continues with his task, leaving Ramsay unhurt, and clean shaven. It's again, a difficult scene to watch; seeing a man who we saw as driven and somewhat intelligent a few seasons ago, now shaving his captor and the man who took his dick off without complaint is quite confronting. Poor Theon!

We move from the Dreadfort to King's Landing, and get a good dialogue scene with Jaime and Tyrion, and a pretty cool training sequence with Bronn and Jaime. Jaime's awkwardness with his left hand is much more pronounced in this episode than the last; he's knocking over wine cups, and now fighting awkwardly with the left hand; at least for 10 seconds or so! He trains with Bronn for a minute, and by the end of that sequence he seems to have rhythm and skill intact; he looks a complete natural with that left hand of his! This little issue I have doesn't detract from the scene as a whole, being as I love what the fight choreographers did here; it's just a little issue that I found. Nonetheless, great fight scene. We move on to Tyrion speaking with Varys, as he makes his way to a breakfast on the morning of the royal wedding between Margery and Joffrey. Remember last week, how the other hand maiden of Sansa informed on Shae and how she was speaking to Tyrion? Well, Varys has latched onto that information, and informs Tyrion of Shae's fate if she is not to leave the city immediately. Another strong scene from both Dinklage and Hill. The breakfast is another strong scene, with a lot of book material finding it's way into what we are presented; from Joffrey's reluctant acceptance of Tyrion's gift of a book to him, to Tywin's gifting of the Valyrian steel sword that he had made for the occasion, a sword Joffrey names Widows Wail, to Joffrey's cutting down of Tyrion's gift. All handled with careful complexity. The tenseness between not only Joffrey and Tyrion, but Tyrion and Sansa, all made for a tight, complex scene.

We move onto one of my favourite scenes in the episode, Tyrion's dismissal of Shae, and his sending her to Pentos. A lot of people have issue with Shae in this scene, being as she's a little too pettish here, but I enjoy watching it. It seems as if she truly does want Tyrion, and she seems genuinely distraught and saddened by the breakdown of their relationship. She still tries to keep up the precedent that she is a powerful female character whose not afraid of anyone when she slaps Bronn across the face as he tries to escort her from the room, but it doesn't seem to work. She simply breaks down. I'm not that big a fan of Dinklage's acting capabilities, but here, he makes this scene. He looks angry, confused, saddened and disappointed, all at the same time whilst telling Shae to leave, so props to Dinklage for delivering a damn good emotional scene. And that smash of the cup at the end... damn that was good!


Our first Stannis scenes of the year are fairly abysmal, but I didn't mind that; he's not got much to do until the end of the season, and these family scenes were interesting and undoubtedly entertaining. Lets be honest, it's bloody funny to watch Stannis squirm as his wife is trying to make light conversation with him. And damn, she is a bitch, isn't she?! Selyse is a weak minded, idiotic fool of a woman, who enrages me more than Joffrey and Melisandre combined. She's just so mindlessly submissive and stupid that I can't stop wanting to beat her over the head! Melisandre gets a pretty good scene with Shireen, Stannis's daughter, to add some awesome in these Dragonstone scenes. It was so damn gratifying when Shireen answered back and conjured up rebuttals to Melisandre's stories and beliefs. Kerry Ingram, who plays Shireen, appears to be one of the few people in the cast who can actually hold their own against Carice van Houten in a scene, which is an impressive feat being so young. She delivers each line with some power, and it makes for an almost funny scene; this woman who burns people alive for disobeying her is being challenged by a young girl of 14!

Let's cross over to Bran, with his first scene of the season, and boy, is it a good one or what! We arrive in the North with him to see him looking through the eyes of Summer, his Direwolf. Bran is woken from his warging to eat, before the group, that being Bran, Hodor, Meera and Jojen, set out to continue North. That is until they come before a Heart Tree, like the one in Winterfell, and Bran lays his hand to it's trunk. Now remember, the Children of the Forest could apparently see all over the continent of Westeros thanks to these trees, as they all have eyes. By touching one, they could see what they all saw. Bran basically does this, and it's awesome. He sees visions of his father, of possibly Balerion the Dread, the three-eyed raven, and a voice that says North. Bran is shaken out of the vision, and tells his companions that the way they head is North. This tells us a few vital things, this vision does; first and most importantly being that the magic of the Children of the Forest does in fact exist, and would that mean that the Old Gods could very well exist?! Maybe the Old Gods are fucking with Melisandre, and pretending to be R'Hllor! Explains so much! Secondly, that dragon in the trailer is most certainly not Drogon, as a lot of the internet were stipulating, but in fact a dragon from the previous Targaryen ruling days. Thanks Bran, you have answered a lot of questions in your 5 minutes in the spotlight; much appreciated!


Back to the wedding. We see a lot of main characters that wouldn't normally associate with each other, associating with each other, and it makes for some really intense moments. Brienne has a scene with Cersei which turns ugly very quickly, Lancel and Jaime have a little jab at each other, and Oberyn verbally spars and threatens Tywin and Cersei, before engaging in a stare off! Again, Oberyn is a badass, as I mentioned last week. Kissing his paramour, who may I remind you is a bastard, at a Lord and Ladies event is a big deal, yet Oberyn doesn't seem to give near two shits about what others think. Total badass, as I've said before! Interestingly enough, a lot of what went down in the books is transferred near flawlessly, including a mock of dwarves that visibly infuriates Tyrion, the cutting of a pie that has doves stored away inside, and Tyrion's various jabs at Joffrey. All of this leaves my heart pumping quite rapidly; I was thinking they may leave him to live another day leading up to this episode, seeing as The Hound kind of should be dead after last episode's fight, but all the book accuracy made that case look far fetched. And, well, they did kill him. And it was fucking awesome! Watching the little shit die was brilliant, but also at the same time horrendous. I almost felt sorry for the little prick as he died, watching his face turn purple, and the piece of pie come hurtling back out his mouth. But then, he still did what I had been dreading most out of this episode; point to Tyrion as he died, accusing him of his death. Wow, your final action had to be that, didn't it Joffrey! Fuck you too! Dontos also stole away with Sansa, if you'll notice at the end of the episode, which is a major plot point that I feel quite a few people will have missed as it rushed by rather quickly. But still, that final shot will forever be remembered as one of the most satisfying moments in television history, period.

We may have been missing Arya/The Hound, Jon Snow and Daenerys, but that didn't downgrade the episode in the slightest. With massive twists, brilliant performances, and some of the most memorable imagery and scenes from all of Game of Thrones, this episode is an utter masterpiece.