Negatives this week included... The over dramatic scenes beyond the wall with Burn Gorman's character (Only their introduction)

Despite last week's come downs, being that the episode prior turned out to be one of the best episodes of Thrones so far, Thrones never fails to disappoint majorly, and last week's episode was still thoroughly enjoyable. Fortunately, for any who may have been enraged by a certain rape scene, and a lack of anything really major happening, this week's episode has some incredibly emotional, touching moments, as well as some utterly shocking reveals that deviate from the book in some quite major ways. So sit back, relax, and lets go in depth on this week's return to form for Game of Thrones!

We begin over at Meereen, with Grey Worm learning the common tongue from Missandei, and we get to see their relationship growing. It's cute, and we also get a little bit of back story towards mainly Missandei, and how she was taken from her family at the age of 5. It's great to see both of these characters getting more of a spotlight than they ever do in the books; I certainly can't fault this scene. Daenerys comes in with Barristan, informing Grey Worm that "it's time," and Grey Worm takes a few Unsullied with him, as he sneaks in to Meereen through the sewers, and rallies the slaves inside, urging them to take up the swords they've brought (Grey Worm and his buddies), and kill the slavers. This is an incredibly well executed scene in pacing, dialogue, and performances. Jacob Anderson gives a refrained speech, which doesn't require volume to come across as powerful and effecting. Seriously, if I'd been a slave for many years, and Grey Worm came in and delivered that speech, I'd most certainly take up arms and kill a few damned slavers! We get a scene with a slaver getting killed by newly freed slaves, and before long, Daenerys is standing in the Great Pyramid, after successfully taking Meereen, thanks to the efforts of the slaves, as well as her Unsullied. She sentences 163 slavers to death, to make up for the 163 slave children who were crucified on the path to Meereen. Her scene with Barristan, where she boldly responds to his suggestion of mercy by telling him that she wants justice for the wrongs the slavers have committed is handled perfectly. It also shows her growth in character; do you recall her in season 1 trying to save all the women of a village the Dothraki had sacked from being raped? How she was afraid to see women crying from rape and murder? Well, look at Dany now! She doesn't give a shit if these slavers are crying out to the heavens, as loud as they can; they are most certainly getting nailed to a cross and dying. Fantastic locations, brilliant use of CGI, wonderful performances; this portion of the episode was 100% perfect.

Whilst there was no Arya and The Hound, and no Stannis, Oathkeeper is one of the best episodes of the season so far. Brilliant performances, plot lines that advanced the centre story line, CGI that is worthy of mention, and an ending that left me shaking, this is a satisfying episode that leaves me anticipating next week heavily. Big things are to come people, but it'll be a few weeks until they take effect; until then, let Stannis memes entertain you! See you next week! 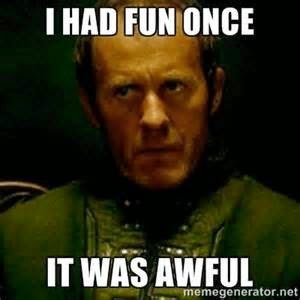 Check out next week's episode's promo!