The Elder Scrolls Online
Check it out... if you appreciated the more subtle, tranquil moments from both Oblivion and Skyrim, and enjoy thematically deep, evolving material.

Skip it... if 2 and a half hours of new Elder Scrolls music is simply too much awesome for your ears to handle 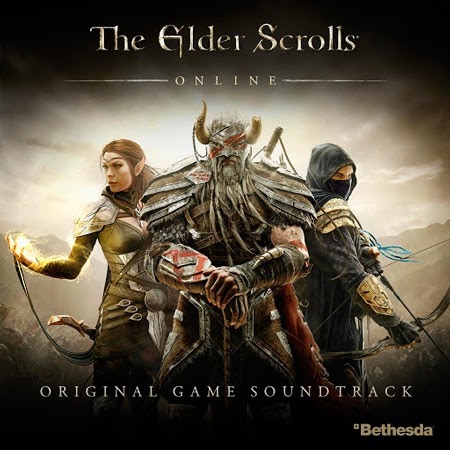 Without doubt, The Elder Scrolls V: Skyrim is one of the most acclaimed games of this present generation; it combined harrowing, emotional and intelligent story telling with sensational game-play, and sowed it all together with some of the best graphics seen in a game, period. You could sink 50 hours into the game, and barely scratch the surface of the abundance of quests and individual story lines available to the player. It's still a defining gaming experience for myself as an average gamer, and I still consider my 100 hours or so spent playing, well spent. Skyrim's soundtrack, composed by Jeremy Soule, is undoubtedly one of the more recognizable soundtracks of the past decade, thanks to it's glorious and technically adventurous presence, and the wonderful aura it provided for the game. It seems to transport you back to Tamriel every listen, as it the intention. The sequel to the game, an online experience this time around, The Elder Scrolls Online, has it's score composed by relatively unknown composers Brad Derrick and Rik Schaffer. They have been given the immense task of providing 2 and a half hours of music to a video game which has had an immense following, leading up until it's release, for the good portion of a year and a half. Will Derrick and Schaffer's combined efforts to produce something that can call itself a worthy sequel to Soule's Skyrim be worth it, or shall the score fall short as a boring, senseless effort at recreating the magic from the 2011 release? Let us find out!

The answer to that above question is quite difficult to come to. ESO's score will certainly be perceived as nothing but a boring and lackluster sequel to an immensely popular and well composed score like Skyrim to a certain group of individuals. Others, though, like myself, shall perceive this score as magnificent, a triumph in video game scoring; an immensely well produced, composed, and executed score, filled with 2 and a half hours of fantastic quality music. After the atrocity that was Captain America: The Winter Soldier, it's good to be able to sit down and listen to some fine, extravagant modern music! I don't think I've heard such a good quality first release since The Hobbit: The Desolation of Smaug, which released all the music, including extended edition music, straight onto the internet and streaming sites alike. Although, here, there are very few down points to the score. As was the case with Skyrim, the score very much inhabits the world of Tamriel, and seems to transport you to this mythical and fictional world, whether or not you've recently had the opportunity to return to the video game. That distinct sound that Soule implemented with all his Elder Scrolls scores has reappeared here, and it allows your head to get around the fact that you're listening to another Elder Scrolls score quite quickly. In other words; the nostalgia is near instant people!

As was the case with Skyrim, Oblivion and Morrowind, themes are in high abundance all throughout, and my attempts to record and comment on all of them here would make this into a fairly abysmal and non-interesting review; there are simply too many of them! Not to mention variations and differences between pieces which point towards a single location or character; take Cyrodiil for example, the capital province in Tamriel. Two pieces which are clearly meant to represent the capital province, Dawn Gleams on Cyrodiil and Horizons of Cyrodiil, have completely different main motifs and thematic material, and both themes are worthy of mention and acclaim, as well as individual analysis, obviously. That kind of in depth discussion and research makes for some heavy writing, undoubtedly, and that I shall spare you. But we do have to investigate at least some of the thematic material provided by Schaffer and Derrick. To begin with, though, I do want to make mention of the starting cue, a piece composed by Jeremy Soule himself; it's as if it's a departing piece. It hyphens back occasionally to the theme for Skyrim, that blissful, vocal arrangement which took the world by storm. It starts the score off in good stead, but somewhat misleads us for the tone of the score as a whole, which is in fact a subtle one, something Soule's contribution contradicts. From beginning to end, we get some quietly soothing music; music that often never reaches the heights or orchestral glory that we are introduced to to begin with. This isn't a necessarily bad thing, though, because the score is still enjoyable and brilliantly composed to say the least.

Theme-wise, Schaffer and Derrick have certainly excelled in what they hoped to achieve. Every cue representative of a location, character, item, etc, has efficient time to grow and stand on it's on, whether or not they be given a 1 and a half minute cue, or a 6 minute highlight. The theme for Tamriel, as indicated by the title to the cue, Tamriel Beleaguered, is an immensely grand, vocally-based piece, which utilizes brass to it's greatest effect. It's a fantastic theme which boasts the heavy battle signature that was required for the subject it's covering; Tamriel being in complete disarray and being forced into a great war between it's own individual races and provinces, which is what is going on within the video game. For what it serves and accomplishes, it's an interesting and powerful theme. The theme for the war as a whole is represented in the piece The Three Banners: Fanfare, another relatively brawny piece, which utilizes some impeccable brass to begin with, before setting off into a wonderful vocal/brass motif, which lasts for little over 8 bars. That is one of my common problems with this score; so many huge highlights, that have barely a showcase of sorts. The shorter and more to-the-point theme for Cyrodiil that I was commenting on before, Horizons of Cyrodiil, has a wonderful main set that displays again, some wonderful subtle vocal range, as well as some beautiful, elegant brass and string combinations. Yet it only lasts a poor 1:15 minutes. Another small quarrel with the score that actually doesn't upset me really, is the fact that barely any thematic material is repeated again in another separate piece. This means the entire score is fresh to the ears, from beginning to end, pardon the first piece by Jeremy Soule which as I mentioned, hyphens back to 2011's Skyrim. It's not necessarily a negative, as I'd originally thought of it as; instead, it allows for some constantly refreshing and original themes for various locations and characters, and credit is worth giving to the composers if they can somewhat effortlessly present 2 and a half hours of constantly reinvigorating music.

The final cue on the score card, in fact a Nordic song sung by musician Malukah, title Beauty of Dawn is certainly this year's The Dragonborn Comes, an absolutely beautiful song that was presented for use in Skyrim. Beauty of Dawn perfectly captures the emotion and subtlety of the rest of the score, and uses that to it's advantage. It's a quiet but harrowing song that will undoubtedly get it's fair share of covers on Youtube towards the future. It's a slightly predictable sort of song, but as was the case with Ed Sheeran's I See Fire for The Hobbit: The Desolation of Smaug, it's enjoyable and utterly beautiful nonetheless.

Despite my often inadequate attention span, which is certainly a hindrance to someone who reviews film, game and television scores, I couldn't be dragged away from my computer for a minute too long; I was utterly engrossed in this score, from beginning to end. It's daunting, certainly; the 2 and a half hour running length is something that most would gawk at, and for good reason. But sticking to the score, pay off will be huge. That constant magical tone that ripples throughout the entire score is the pay off, whether or not the score beams to orchestral heights. Bethesda have long been able to drive their composers to completing filler music, that doesn't necessarily obtain common filler music traits; instead, it can be listened to and enjoyed on it's own, whilst still encompassing and representing the world it's placed in perfectly. That's what's been able to occur in the previous Elder Scrolls games, and that's what has occurred here. Whilst the simplistic nature of the music that Schaffer and Derrick have provided will turn off some listeners, who want some more excitement or action within their fantasy scores, others will embrace this subtle approach to such a bombastic and complex video game. Whilst I think I was wanting and expecting something a little more explosive and orchestrally astounding, I'm happy that what has been provided in any case.