300: Rise of an Empire Score Review 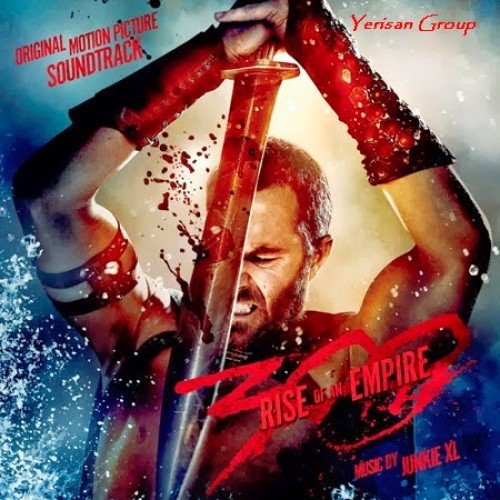 The first really major sequel of the year, to my knowledge, is the sequel to Zack Snyder's somewhat masterpiece 300, a film which I thoroughly enjoy, despite my rating of 6.3. It's pretty much the damned definition of a popcorn flick; minimal plot, decent enough performances, amazing, stylistic, brilliant action! The sequel, this time directed by Noam Murro, takes place before, during and after the events of the previous film, and introduces us to a new main character in Themistocles, played by Australian actor Sullivan Stapleton. Whilst the critical response to the sequel isn't as good as the previous film in the franchise, this film is certainly to be, again, a decent popcorn flick. The score is composed by Junkie XL, the man behind last year's Paranoia, one of the best scores of the year, and is one that boasted a lot of anticipation by myself. Lets see how he fared!

This score is utterly brilliant. Sure, it has a few down points, where the pace and excitement is abolished, but for the vast majority of the play time, 300: Rise of an Empire is a brilliant ride. It's filled to the brim with some fantastic action riffs, and the theme is one of absolute bliss. Junkie XL has employed one of the best percussion ensembles I've seen in recent years. Even Hans Zimmer's Man of Steel from last year has a hard time keeping up with this score in excitement and energy! I can certainly see this getting a nomination and even a win for Best Action Score by the time the end of the year rolls around, as this has everything that a pure, brilliant action score requires. Fast, exciting tempo, amazing and heavy percussion, and a really enthusiastic air to it all. Even the electronic riffs and melodies are all outstanding. Junkie XL has proved himself to be a master in the way of synth, and this score only further that belief of mine. He's one of the best in the business at evoking emotion from artificial sounds; certainly not an easy task. Even the low points of the score are interesting and enjoyable. Despite the fact that there are a lot of pieces which didn't find their way onto the highlights list, don't mistake them all for being bad. Sure, there are certainly a few which are quite unremarkable. Yet still, the vast majority of the pieces on the card, highlighted or not, are all quite close to perfection. Its been a long time since I've found an action score with such near flawlessness, but apparently, I have! Pompeii was fantastic, but that was more disaster film than full on, testosterone filled action film like 300: Rise of an Empire is.

This is, like I mentioned, a testosterone filled score. Junkie XL is unrelenting in this furious, devastating score, which constantly hammers you with simplistic, loud riffs which are simply irresistible. You're going to be humming some of these melodies very soon into the future, I can guarantee you that! There are two sides to what Junkie has constructed; the synth-fest, and the percussion, action themes. Some listeners will enjoy one aspect and loath another, hate both, or appreciate both sides of the equation. Zimmer haters should back away from this score, because it has a lot of traits of the big man; a lot of repetition, some heavy use of synth, and a heap of percussion! If you enjoy Zimmer's style, though, you should quite enjoy this score. Being that I'm a huge Zimmer fan, for the most part, this sits perfectly on my shelf. Every big action riff is beautiful, as I see it. Near nothing came off as try hard, as many an action score can come off as to the listener's impression. This is a straight up, kick ass score.

There are some really subtle, saddening moments within the score, nearly all of which are on my highlights. History of the Greeks is a clear stand out; it's brilliantly composed, and actually quite emotional. Who would've thought something in an action film like this could come down to being emotional?! It's the slow rise to climax that made History of the Greeks so powerful, which is such a huge contrast to the blazing fury that Junkie infused into the rest of the score. Queen Gorgo's self titled piece is also an incredibly well composed and powerful piece that I thoroughly enjoyed. For the most part, the slower, emotional pieces that lie towards the end of the score are all brilliant stuff, to add to the size and power of the first brutal half an hour of this score.

For me, it all comes down to the first piece, History of Artemisia. This is, at this point in time, the best piece of 2014 so far. By the gods this is good stuff. It's crazy, furious, brilliant hammering music that lasts a good 9 and a half minutes. It's 9 and a half minutes of some of the best music you'll hear all year. You can expect a nomination for this score as a whole by the end of the year, but you can expect a win from this piece for best individual piece of the year. This is outstanding, high octane action music, with an abundance of brass, percussion and beautiful synth, that never slows down. I say that in a positive tone, as that is one of the joys. Never does that 9 and a half minutes feel like a struggle; that is no mean feat.

Conclusion:
Like Man of Steel, I feel like I'm in the minority on this one. I love this score, from beginning to end. There are points which did irritate me, certainly, yet these are undermined by the quality action pieces and grandeur that this score provides. This is going to earn some nominations from me, come end of year.