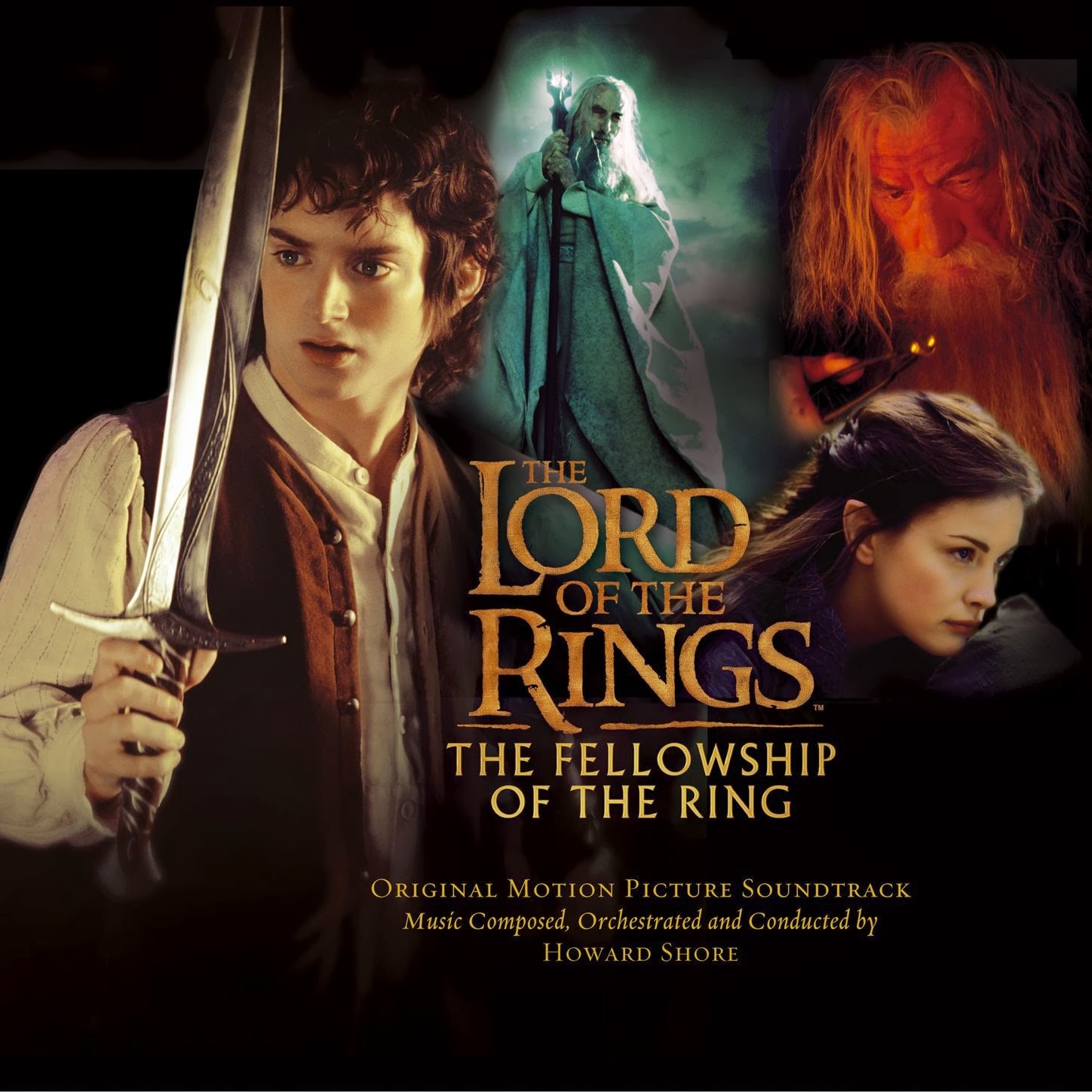 With the final installment in Middle-Earth hitting us at the end of this year, I thought it quite necessary to delve into all the individual scores within the Peter Jackson Middle-Earth franchise that I haven't reviewed yet; that's right, from Fellowship to An Unexpected Journey! I'll be revisiting each chapter in the franchise every so often, leading up to the release of the final Howard Shore Middle-Earth score. It's quite sad, to think of it like that. But without further ado, let's explore the first piece in the puzzle, Fellowship of the Ring!

Peter Jackson's first exploration into the realm of epic fantasy turned out to be the least satisfying of films for myself. Fellowship as a film feels oddly paced, and feels disconnected with itself; the first act and second acts of the film don't slot together well to create a single, coherent film that follows a single direction the entire running period. Despite this fault, Fellowship is still filled to the brim with amazing action sequences, an incredibly versatile range of locations, and top-notch performances. Apart from pacing, there really is nothing to fault within Fellowship of the Ring; high esteem, for a very good film. Even Tolkien purists, for the most part, could rest easy. The vast majority of the film was well transferred from the book, as was Jackson's intention. Unlike so many directors and screenwriters nowadays who butcher the source material they are trying to adapt, Jackson set to bringing the world that Tolkien had created to life, whilst staying as faithful to the source material through the entire duration of the production.

Leading up to the release of the films and their subsequent scores, fans of film music stipulated on the composer who would be undertaking the juggernaut that is the Lord of the Rings trilogy. Many mistakenly expected that veteran composer James Horner would helm the music, thanks to his knowledge in the fantasy realm. These rumors would be proven false when Howard Shore was announced as the official composer for the trilogy of films. The scoring world held a collective gasp at the announcement; Howard Shore was certainly not someone who was experienced in the way of fantasy. His scores for Silence of the Lambs and The Fly had him typecast as a dark, horror composer, who impressed more with subtlety than grandeur, the kind of music that would be required for the films. Yet, despite the outrage from listeners everywhere, Shore set to work to compose, orchestrate and produce 12 hours of music within 4 years; a mammoth operation that very few composers can boast of. Whilst James Horner may have more naturally fit into the role of composer for the 3 films, a range of factors allowed Shore to comfortably attain the nod of approval from Jackson and his producers; his skill with an incredibly large number of instruments, his intricate, detailed writing ability, and his careful boldness. Whilst Horner is undoubtedly a brilliant composer, Shore is simply more suited to applying a rich number of versatile, ranging themes for all aspects of the huge world of Middle-Earth. Providing those versatile themes is exactly what Shore did; he provided an incredibly large number of themes, all for different aspects of Middle-Earth, including themes for near all our main characters, races that exist within the fantastical world, as well as locations. All this he does without necessarily reusing any material and themes he had already established and elaborated upon; Shore would take the basis from something that had been introduced formerly, and expand upon it, to explore more layers of the world. 12 hours of music was composed, and never did any of it feel rehashed. It's a marvel in composition skill.

Without a doubt, Lord of the Rings: The Fellowship of the Ring is one of the best scores ever composed. There is so much rich variety in everything that is indulged in within the score, that you simply are never less than fully engrossed and entertained by what Shore has provided. The main theme, for example, one of the most recognizable and brilliant themes in film scoring history, is a thematically perfect set, which recognizes the vast size and beauty of all of Middle-Earth, and respects that within the music. It's a theme that sets the stage for the entire score, and the tone that will be undertaken; bold adventure! Whilst a lot of fantasy scores are driven by the action pieces, or those most subtle, slight moments, Shore consistently stays true to what the source material and film aspire towards, that being the tone for adventure. Shore looks towards expressing the unknown within the music; from the beginning of the film and score, our hero Frodo is simply accustomed to the way of his small community, The Shire. From there, Frodo and his companions must venture into unknown territory, and Shore represents that aspect of the film perfectly. You explore material throughout the score that sounds like nothing heard previously, all darker than the former. You can almost picture the story in your head, thanks to the effect the music has. You understand in musical form what is happening; the hero is venturing into the dark abyss. Shore represents that dark abyss with material that is thematically accomplished, and beautiful.

Shore takes measures to make sure you understand that all factions, races and individuals within the story are interconnected. The balance of the world has all of the different races depending on each other for survival, and this is respected and realised within the music. Small similarities and bridges between themes allow you to understand this, all woven together seamlessly, despite the fact that all themes and motifs are individual and relative to their own respective properties and lands. It's masterfully done, seeing as all the themes for the individuals and races are so diverse. It's as if Shore set himself challenges along the road to completion, seeking out the most obviously painstaking approaches, which would have the best effect in both the film's context, and album's context. This is an incredibly well thought out score, that brings together not only the best in Howard Shore, but the best in orchestral music in general. I've always thought classical music to be the most charismatic and well composed orchestral brand out there, and paired with the intoxicating atmosphere of the Lord of the Rings realm, we have a match made in heaven. Shore's most unparalleled approach for such a mammoth task is something that deserves incredible acclaim, as despite the fact that there are 12 hours of music Shore needed to develop, all original and involving, Shore has created something that is composed with classical grandeur wholeheartedly, and with the majestic, epic grace of James Horner, Jerry Goldsmith and John Williams combined. All brilliant composers, no doubting that, yet Howard combines the adventure and ambitiousness that often accompanies Horner's scores, Goldsmith's inventiveness and willingness to look outside the box for uncommon sounds that add to the individual persona of the score, and William's skill in constructing elaborate, fleshed out themes and character driven music. All together, combined, and it makes for some insanely beautiful, heart wrenching and captivating orchestral music.

On the original score release, consisting of 18 tracks, every piece is a highlight, with a few pieces standing out with individual moments and riffs which truly take you aback. The most commonly acclaimed piece in the entire score, by my account, is the piece The Bridge of Khazad Dum, which initally elaborates on the theme for the trilogy, followed by harrowing, exciting, brass-based melodies, which all comes to a sudden conclusion, before reigniting with one of the most devastatingly emotional sets in scoring history. The priceless (more likely not!) use of the vocals turns Khazad Dum into something of it's own, and nothing else on the entire score can simply match the emotional gravity and complexity that is instilled within the piece. The instantly recognizable Hobbit theme makes it's first appearance in Concerning Hobbits, again, one of the stand out pieces on the card, that has me dancing and hopping more often than not! It's such a blissful theme, comprised of a faultless tin whistle solo, followed by a sharp and appropriate melody delivered by a fiddle. It's a parting from the rest of the tone that the score takes, which is something that I welcome happily. Parting from the original release, the Complete Recordings, released in 2005, includes 3 hours of insanely well cultivated music, that despite the enormous length that often wards off less enthusiastic listeners, consistently provides reinvigorating, fresh music which never seem to tire. If you feel up to the challenge, listening to the 3 hour recordings will be bliss for your mind. If you're like me, your attention span simply won't hold out that long, no matter how concentrated and determined you are! No matter; taking the recordings in short bursts seems to prove worthwhile and fruitful. It is outstanding and utterly unbelievable to behold, despite the fact that I've listened to the recordings quite a few times, that Shore could've put so much time and effort towards a single film. Never ending praise flutters from my lips and fingertips, every single time the music begins. It's not hard to believe that Shore won an Oscar from his work on Fellowship; it's just too damn inventive and engrossing to discard as a nominee, and anything less than an award-worthy score.

Conclusion:
When people ask me of my favourite score, I tell them Lord of the Rings: The Fellowship of the Ring. It is not because my love for the films are unparalleled, and I feel an obligation to reward it highest marks. It is because Shore's timeless dedication and skill is unprecedented in not only the fantasy-epic genre, but in general. This trilogy of work is unmatched, and Fellowship is the opening and greatest chapter to that trilogy, and for that, it earns nothing but praise.

I will be listing highlights during the next installment of this set of reviews. I just saw it as unnecessary, seeing that I state how every piece is a highlight!