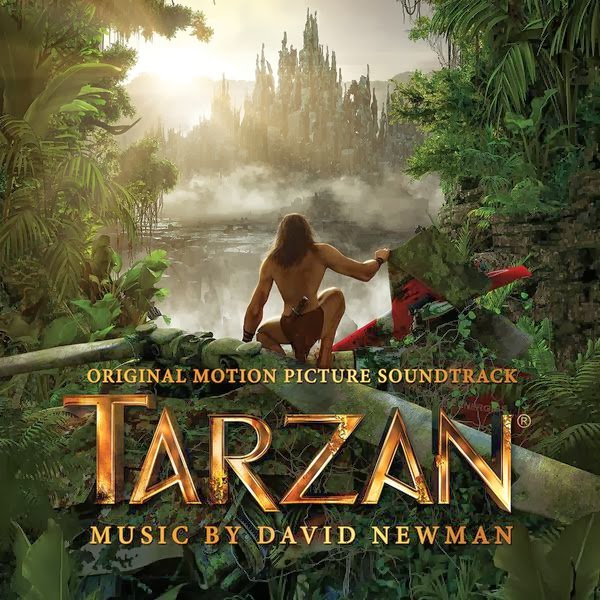 David Newman is an unknown name to me, at least before this title. Tarzan is my first taste of this apparently pretty damn good composer, whom according to a few of my friends, I've been missing out on for quite a while. Being a relatively new score fanatic, I guess this is to be expected, but I'm still disappointed that I haven't heard a Newman score before this. If the last name sounds familiar, it's because it probably is; he's brother to the great Thomas Newman, a wonderful composer, who has graced us with music for The Shawshank Redemption, Finding Nemo and 2012's Skyfall, a very good return to form in the way of music for James Bond. Poor David, living in the shadow of his brother for so long I expect. Well, for new fanatics, David is here to shove his brother out of the spotlight and take his place with Tarzan, one of the early releases in 2014 for the film which hasn't graced US or Australian soil. Let's delve into the greatness that is Tarzan!

This is an orchestral music fan's wet dream. It's fast, exciting, and explores a range of paths to reach a singular goal, that being to create a booming, lively re-imagining of Tarzan. As I said with Pompeii last week, I often overuse the word epic, but in all seriousness, this score should certainly be addressed with that word. Tarzan is truly epic. From the sweeping string phrases which mix perfectly with brass and percussion alike, both of whom deliver fun and upbeat riffs and melodies, as well as the fair share of carefully composed grandeur pieces, Newman has created something that is quite simply astonishing. Newman has figured ways to make every idea presented by the filmmakers into soaring, interesting pieces of music, which entrance and stun you. Seriously, who would've thought Tarzan climbing a tree could be anything but boring and predictable? Well, Newman sets out to prove to you that it can be just as exciting as any magnificent battle piece that a great composer such as James Horner can deliver. Tarzan Climbs Tree is in all honesty, one of the best pieces on the card, for damn's sake!

Newman reminds me of a mix of composers, all of whom I'll explain why. James Horner, whom I mentioned before, comes to mind when you listen to this score. His score for Avatar perfectly reflected the rough environment of the forest, yet kept the sense of adventure and exploration close to heart. That was what Avatar was all about; exploration and discovery, and Horner never shied away from giving that to you. Newman seems to deliver something like that. Discovery, adventure and intrigue are all here, combined with bombastic forest themes that are truly awe worthy. Whilst Horner enjoys using 6-10 minutes to indulge and explore out themes and underlying key phrases within his every piece, Newman keeps the majority of pieces relatively short, as to keep everything interesting and constantly exciting, and it's in good stead. Another comparison I made early on into my listen of the score is that of Audiomachine. Paul Dilentir and Kevin Rix's music is full of the epic, sweeping pomp which is bliss to anyone's ears. Newman has done what Dilentir and Rix do close to every time they sit down to write music; create glorious music which never ceases to grow and demands greater volume and attention. Howard Shore happens to spring to mind, as another comparison, thanks to Newman's ever-expanding world he's created here. It sounds as if he's forming a world around you, and allowing you to follow Tarzan along on his journey, as the Lord of the Rings scores, for one reference, did for me. Finally, Newman has also explored the Zimmer within, as there are a few moments here and there where Newman induces some synth into the mixture, in the best possible ways.

Newman has explored not only the intrigue that Tarzan has always possessed in his big screen endeavors, but large battle themes, as well as romance. Tarzan Helps Jane, one of the quietest pieces on the card, introduces us to the couple's main theme. Performed by an ensemble of strings, Newman truly pulls at the heart. It's very simple, yet quite affecting. As a contrast to the romance, when it comes to battle, Tarzan is also at the ready, with an abundance of really powerful, awesome music! Tarzan Fight is everything that the score encompasses. It has great scale, intensity, and bombastic, quality orchestral music! Newman never truly sticks to the same idea or theme for too long, and this is refreshing. He's constantly finding new ways to express Tarzan's thoughts in a musical sense, and it's ever-exciting. Not a single theme that Newman has willingly seen to seems unfinished or badly composed. No, it's all really thought provoking music that works perfectly together.

Vocals have been underestimated for a long time by the scoring community, but they are stunning here. Austin Wintory's The Banner Saga was the first really big taste of vocals I'd had in a long time, and I feel like that has prepared me for this. Vocals aren't used too often here, as to ruin the effect, but are instead used to explore the vast forests, and the exploration theme that Tarzan is requiring of. Newman has found the best cast of vocal performers, and they work wonders within the score. Newman's use of brass is also worthy of much acclaim. He uses it sparingly, in and about the lighter pieces, as to make the phrases which take use of the brass all the more powerful and memorable. When the french horns and trumpets come to play, it's brilliant stuff. Newman mixes it up every so often in the way of instruments, implementing a somewhat Eastern vibe into bits and pieces of the score. It works well with what Newman was trying to do with the score, and it only receives approval from my end.


Conclusion:
David Newman's score for the film Tarzan is one of the best orchestral efforts I've seen in a damn long time; it's exciting and engrossing from beginning to end. Some will say that Newman is a Horner-wannabe here, but that is simply far from the truth. It's hard for me to say, thanks to my love for the score, but Tarzan is simply superior to my favourite Horner score, Avatar. Tarzan is brilliant.