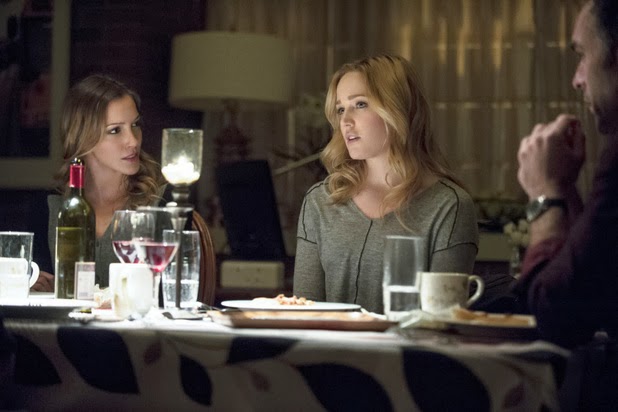 Arrow seems to be on a downwards spiral at this point; I feel like the dialogue is getting worse every week, and it appears that the writers and directors seem to be taking the show a tad too seriously. Sure, it's fine to have your characters engage in personal dilemmas, but you don't have to have them throw tantrums every bloody episode! (Looking at you Laurel!) Nonetheless, the last episode, Heir To The Demon, wasn't too bad; a plot which actually enhanced the overall story is always a good thing! And then the Winter Olympics had to move Arrow to the side, and we didn't get a weekly fill for a couple of weeks. Thankfully, all the bobsledding and skiing is over, and now we get back to scheduled programming. This week's episode has a few character reconciliations, some decent action, and a complex, interesting villain. Let's analyse this episode of Arrow!

This episode is quite slow burning, and focuses on a couple of characters relationships, mainly Laurel and Sara's. We get a lot of Caity and Katie back and forth, and to be blantanly honest, it wasn't that entertaining. They have some decent enough chemistry, but ultimately, the dialogue between the two was just a little too dramatic. The writers have been, like I mentioned, taking this much too seriously for the past few weeks. I'm sorry, but speaking in vague metaphors half the time, and shouting at each other the other half does not create tension or drama; it's quite laughable! Cassidy's performance this week was pretty lackluster, and it makes for some really funny scenes. She's trying so desperately hard here, yet it makes no difference. She comes off as a try-hard. Felicity also gets some major screen time; after Sara's induction into the team last week, Felicity is feeling a little left out. Unlike Sara and Laurel's back and forth, this angle worked for the character, and Emily Rickards nailed all of her scenes. Oliver and Felicity get a little scene together towards the end of the episode, where he assures her that she will never be forgotten, and it's delivered perfectly. Felicity's story arc was really furthered this week, and it was good to see; we haven't seen much of our favourite computer hacker in the previous episodes, and it was refreshing to see her get some more spotlight.


This week, Arrow and Black Canary, along with Felicity and Diggle, have the job of stopping The Clock King, a villain who has an obsession for time and clockwork. He uses these traits to rob banks, and then deliver the money to his sister, who needs a lung transplant. He's a very intelligent villain; not something we see every episode on Arrow, I know! He was ridiculously fun to watch, and portrayed very well by Robert Knepper. Fantastic casting, by the way! The fact that his skills are intellect based really made this episode into something of it's own. Finally, a villain who doesn't need to use brute force to muscle his way out of a bad situation! And, according to the rest of the internet, he's fairly accurate to his comic book version, which makes everyone happy, in this situation. The only problem with this villain, unfortunately, would have to be the final confrontation between himself and Black Canary (and Felicity; she's there too). It was over a little too quickly, and wasn't nearly as tense or exciting as it should have been. Nonetheless, great casting and writing for this villain. I hope to see him in the near future; he'd make a wonderful recurring baddie!

The flashbacks are now getting a little pointless. This week's flashback was to show us why Sara is caring for Sin, or was, for that matter. They no longer share that much screen time with each other, apart from one of the final scenes of this week's episode. Sin's father died in a plane crash, whilst Sara was on the island, and he had her swear to find and protect Sin. Sure, it was a little bit of welcome back story for Sin, but seriously, it shouldn't have taken up the entire duration of the flashbacks. Completely unnecessary story decision. The flashbacks are all leading up to a climax, which will surely be the fight between Oliver, Slade and Sara, and Ivo and his men. Until that glorious episode, we're going to have to endure filler flashbacks, which will serve as toilet breaks. Yippe!

The final few moments of this episode were near perfect; Oliver and Moira was brought back together at the Queen's estate by Thea, whom had sensed that something was up between two. As Oliver greets his mother, he comes to the realization of what his sister has done. His mother calls him into a meeting with none other than Deathstroke himself, Slade Wilson, whom she was just speaking to. The two have some small words with each other, before the episode cuts to black. Fantastic ending to the episode! This is sure to lead into the inevitable fight between the two men; the fight which every comic book fan is surely anticipating with haste. I have questions about the opening to next week's episode after this ending; does next week's episode open with the continuation of this ending scene, or have these two parted ways when we open? Does Slade get the jump on Oliver early into the episode? So many questions to ask, all to be answered in a few days.

Conclusion:
The dialogue and drama within Time of Death was a little too laughable to have been taken seriously, and Katie Cassidy is still irritating to watch act, yet Felicity's character development, the fantastic villain in The Clock King and the strong ending saw this episode go out with a positive rating.