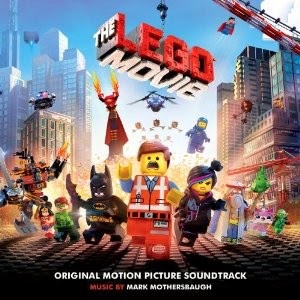 2014 has already been flooded with an abundance of really great scores; Tarzan, Pompeii, 300: Rise of an Empire; I'll review that some time into the near future, you needn't fear! Another score to add to that list of scores is certainly The Lego Movie. The film is already one of the biggest and most critically acclaimed films of 2014; it boasts an impressive 96% approval rate on Rotten Tomatoes, and already found it's way onto the IMDb Top 250 Films of All Time! The score is composed by relatively unknown composer Mark Mothersbaugh, a man who has been in the business of scoring for quite a number of years. He's worked on television scores for the most part, so this is surely quite a big project for the man. Lets hope he can pull it off!

This score is both really fun, and really dramatic, and it nails both sides of the equation perfectly. There's a lot of really fun, quick, exciting pieces which have you smiling the entire way. The energetic and skillful use of electronic music contributes to the fun nature of the score. On the other side of the spectrum, Mothersbaugh adds a lot of vocal-based, slow moving drama to the score that is very well received by myself. Wyldstyle Explains, the 7th piece on the card, is really the introduction to the dramatic element of this score, and it couldn't have been done any better. There's a lot of peril that the rest of the score seems to lack quite a bit within these seemingly out of place pieces, and I appreciate it.

Mothersbaugh does go a little overboard on the electrical element, every now and again. Some times, he simply blasts high toned electronic music, and it's not at all pleasant to the ears. It's a little reminiscent of Jukka Rintamaki and Johann Skugge's Battlefield 3 score, which constantly enlisted the help of irritating, badly produced synth, which contributed only pain and misery for the listener. I still regret listening to that abomination. Fortunately, Mothersbaugh declines are at odds with the ascents in composition skill and enticing energy. In all honesty, you're not going to remember the lows within this score; only the really awesome high points, of which there are many.

Conclusion:
Mark Mothersbaugh's score for the film The Lego Movie is an engrossing, fun, nostalgic piece of work that begs for repeat listens. This is such an easy listen; you simply have to take a look into this one! Nearly everything on this score is awesome (bad pun)!