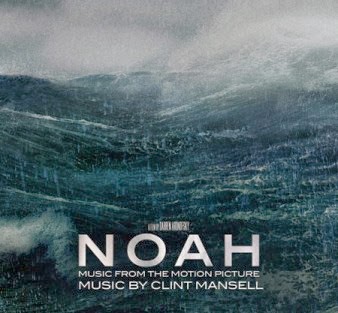 The onslaught of biblical-based entertainment, both released this year and last, has been a difficult time for myself. Not only do I disagree with these film and television show's source material and it's validity, but I also despise the vast majority of these films and television shows as entertainment! Last year's The Bible was dull and never really held my attention. The score for the show, by Hans Zimmer, is equally as dull. I generally hold Zimmer in high esteem, but I'm being generous when I say that the score was decent. Son of God was a cut down version of The Bible, except made for film this time, and the score was pretty much a remix of the original. Uninspired and unoriginal, it was yet more disappointing than it's predecessor! Now we have Noah, a film directed by the great Darren Aronofsky, a favourite director of mine, who has headed great films such as The Wrestler, Black Swan and Requiem For A Dream. The score is composed by Clint Mansell, a man whom I've never heard of before, who composes most of Aronofsky's work. I'd say it would be a great time to get acquainted with this Aronofsky collaborator with Noah! Let's dive in!

Noah is an orchestral score, which relies on an elaborate and brilliant string ensemble in Kronos Quartet for the vast majority of the score, and for this it deserves high acclaim. It's been a long time since I've had the pleasure of listening to a score with such an emphasis on strings. Austin Wintory's The Banner Saga had a lot of string action, yet it wasn't ever a major focal point for the entire score, despite it's importance. Here, though, Mansell lets the strings lead for the vast majority of the running time, and this leads to both good and bad moments. The string ensemble should maintain a melody or theme when utilized best, in my opinion, and Mansell does use strings for that reason often. It's when he takes the strings, and puts them alongside the brass ensemble, and let's them carry on the background riffs, that this score struggles. Those strings are really the centre piece for this score, and when they're heading the background, we have a problem! Fortunately, though, not all is bad when the strings take a step back, as Mansell utilizes all the orchestra in as many ways as possible, from subtle acoustic and electric guitars, to beautiful vocals, and some irresistible percussion work, which is highlighted best with the timpani work. For any aspiring composers, this is a score which I would suggest; whilst not everything fits in place perfectly, the written material is near perfection. Mansell creates some awe-inspiring pieces that have music that is technically stunning, without being too inflated or complex. The sound production, inclusion of foreign and somewhat unknown instruments that all add to the atmosphere that Mansell has attempted to create, and hum-worthy thematic material, all makes for something that can be considered brilliantly composed music, which never tries anything too spectacular. Keeping it simple and to the point!

Despite Noah's relative spectacle and brilliance, there are actually few standout pieces in the 22 that are included on the card. The best piece on the card, undoubtedly, is track 8, Every Creeping Thing That Creeps, which is a 5 minute suite on what biblical music should sound like. Take note Hans; if you ever get called back for another of these projects, keep it simple, and lose the edge that the violin had all throughout the piece Faith! You don't need anything that ear-piercingly horrendous! You can still represent the time that the film takes place in without losing the vast majority of your orchestra, and leaving the score on the incapable shoulders of the string ensemble, solely, and your synth board! Yes, Mansell takes advantage of synthesizers every now and again, but they only push the score along, or serve as short bursts of filler. They don't take up entire pieces! Mansell never forgets the time period he's composing for, yet he still makes aesthetically pleasing music, incorporating instruments and parts of the orchestra which I mentioned earlier that seem to be outside the norm for this genre of music. For his intentional abandoning of tradition where biblical films are concerned alone, he deserves a pat on the back from myself! It's pieces like Every Creeping Thing That Creeps that highlight the compositional skill of Mansell, as well as the straying from everything we seem to expect from the genre.

Conclusion:
You can certainly identify it's biblical routes, yet Noah encompasses variety and thematic material which surpasses your average biblical sourced film or television score. It doesn't have as many highlights as it should, that is for sure, yet still, this is a truly fantastic score, that despite it's shortcomings, has been very well received by myself.

Highlights:
5. The Fallen Ones
8. Every Creeping Thing That Creeps*
9. I Will Destroy Them
13. Your Eyes Shall Be Opened, And Ye Shall Be As Gods
14. The Flood Waters Were Upon The World
16. The Judgement Of Man
17. The Spirit Of The Creator Moved Upon The Face Of The Waters
19. What Is This That Thou Hast Done?*
22. Day And Night Shall Not Cease*