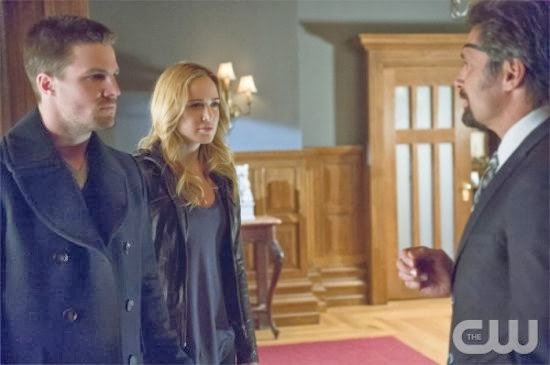 It's disappointing times for Arrow fans; the show's writers have been trying to convert this show into a very serious action/drama, which is something that this show does not need at all! Last episode was all about the character development, and aside from a pretty damn awesome villain, and a great cliff hanger towards the end of the episode, it was fairly boring overall. Everyone is taking themselves a little too seriously, and at this point, it's now become almost comical. I laugh every time Laurel spits the dummy, it's just too funny! This week though, Laurel has got some time off, so we're hijacking a freighter, and being taunted by our former friend in Slade Wilson. Lets jump into this episode!

I'll begin with the present day scenes, which is what we've come to anticipate all week. And... they're atrocious! Next to nothing happens within the present day scenes, which makes for a fairly dull episode. Yes, I understand that this episode was all about taking the freighter, it's just the writers could have done so much more with the Slade angle, him being back in Starling, and seeming to threaten Oliver. What did they do in this episode exactly? Fight? Threaten each other? Neither, really. Slade walks around in Oliver's home, with Moira, and the convenient Thea. Oliver joins them, fuming at his former friends sudden arrival, as they look at art. Slade basically taunts Oliver this entire episode! Slade doesn't even have a real, proper confrontation with Oliver, so all we get is Slade implying that he can kill Oliver and his family any time he likes, without actually saying a word. Sure, he gives Oliver a bit of a shock at the end, when the two can finally talk alone, but that talking session lasts less than 30 seconds! Sara, Roy (Where you been?!) and Diggle do arrive to save the day, but they add nothing to the episode except some awkward, cringe-worthy moments. This episode did next to nothing to advance Oliver and Slade's characters in the present day, which makes for a really shit-poor episode.

Ultimately, this episode isn't about the present day scenes; it's all about the freighter scenes, and those scenes were all fantastic. Greg Berlanti, the director, perfectly constructed the island segments, and it made for some good moments. Amell, Bennett and Lotz all performed brilliantly, as did the rest of the ensemble engaged in creating those segments. Slade got some really good character development whilst taking the freighter; something he didn't get during the other half of the episode. Slade has finally realised what Oliver did, how he saved Sara and not Shadow, and now Slade's a little pissed off. It's been wonderful to watch his decent from controlled, quick-thinking soldier, to out of control monster. It's all thanks to Manu Bennett, I believe. Bennett has given fantastic performances all throughout the season, and he gives one of his best here. Last week's action scenes were all fairly disastrous, whilst this week, we finally get some awesome, kick ass Arrow action, which is what I've been begging for, for quite a few episodes. I hope they keep this great quality of island segments up for a while, as it's now getting very interesting; previously, the island segments didn't appeal to me in the slightest. Now though, we have a reason to be invested in them. I'm excited to see how Slade deals with Oliver next episode, and whether or not Sara comes back to save Oliver's ass!


Conclusion:
Short review this week, as there's not exactly much to review here. Nonetheless, it's fairly simple to summarize this week's episode. Present day scenes were all atrocious, whilst the island scenes were fantastic. Let's hope for a Slade on Oliver fight next week!